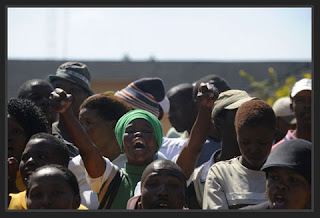 Supporters of the alleged killers assemble outside the court
The following is from a news report on iol.co.za published on Thursday and submitted by Dina:

-----------
Eugene Terre'Blanche's youngest alleged killer is happy and safe, while his jailed accomplice has his future in the hands of a maverick lawyer.

Both accused - 28-year-old Chris Mahlangu and a 15-year-old minor - abandoned their bail applications at the Ventersdorp Magistrate's Court yesterday, where they were making their second appearance since the murder.

The teenager, accused of murdering Terre'Blanche, traded his freedom for a bed, three meals a day, and the chance to attend school and watch TV at night.

The boy was supposed to apply for bail yesterday, but told his lawyer not to go ahead with the application because he was comfortable at the place of safety where he has been held since his arrest.

Lawyer Zola Majavu said the accused was having experiences he had never had before.

"Even the social workers agree that he should be kept there. It is in his best interest that he stays there," Majavu said.

Asked if the teenager was aware that he would have to go back to his hard life if acquitted, Majavu said he was aware, but this would be dealt with it at the relevant time.

'snip'
---------------
Moroko said Mahlangu would plead not guilty to all charges. He would argue that the two had argued over wages and he had acted in self-defence.

The lawyer confirmed he had abandoned claims of sodomy against Terre'Blanche, despite having earlier alleged that Mahlangu had been sexually assaulted.

The matter was postponed to May 10. Both accused are facing four charges: murder, housebreaking with intent, crimen injuria and attempted robbery.
'snip'
---------------------
Local community members arrived with placards reading "Hey boere stop killing our farm workers and stop raping our black women"; "Boerevolk is in heaven"; "Land for whites is a dream that should not happen"; and "The ANC is not responsible for Terre'Blanche's death".

A helicopter hovered above the court as the crowd of protesters grew throughout the morning and became louder, blowing whistles and vuvuzelas.

Recorded songs such as the banned Dubul' iBhunu (Shoot the Boer) were played over loudspeakers.
'snip'