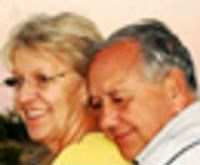 Elizabeth and Jan Smit
From the News24 report dated October 15th: The small coastal town of Stilbaai in the Southern Cape has been rocked by the gruesome murders of an elderly couple (Since named as Jan and Elizabeth Smit, pictured above).

The bodies of the couple, both in their sixties, were found by police on their smallholding near Jongensfontein on Thursday.

A friend went to the smallholding at about 09:00 after she became concerned when she was unable to get hold of them, said Southern Cape police spokesperson Captain Malcolm Pojie.

"She saw the couple lying in the house and called the police. The woman was tied up and was presumably stabbed with a garden fork.

"The man had several wounds to his body. It was an extremely gruesome murder and the house was a mess," added Pojie.

The couple were presumably murdered sometime between Tuesday and Thursday. Although their names are known to reporters, police said their identities would be revealed once their next-of-kin had been informed of their deaths.

Forensic officials were on Thursday night still searching the scene for clues, to determine how the murderer(s) had gained access to the house. Robbery was presumably the motive.

Reporters learned that the couple used to own a coffee shop in Stilbaai and had moved to the area from Lydenburg in Mpumalanga a number of years ago.

Dominee Willie Gouws of the NG congregation in Stilbaai said he had known the man and woman well. "They weren't registered members of the NG Church but they were very religious people."

Another Stilbaai resident, Philip Claasen, said the people of the town were shocked by the murder.

"It is totally unheard-of in Stilbaai. And totally unacceptable. They will have to look into these types of incidents.

"Keep in mind that 60% of the residents of Stilbaai are older than 60. It is a retirement town and the residents here are very exposed.

"There has definitely been an increase in crime recently. There are several elderly residents who live on smallholdings here," said Claassen.

He described the deceased as good, friendly people.

Pojie said post-mortems would soon be held on the couple.

By late on Thursday, no one had yet been arrested in connection with the murders.
News report
Censor Bugbear report on Farm Murders