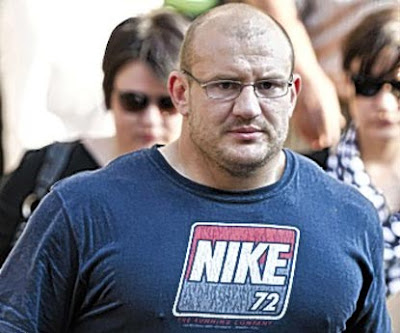 'Every day Whites are killed by blacks in South Africa. Thousands a year. Many do not even make the daily newspaper, but let it just be the other way around, or let a white just successfully defend himself against assault by blacks, then all hell breaks loose in South Africa.

In South Africa the law is on the side of the criminal. When a black breaks into the house of a white person and even attempts to stab the owner, the owner is not allowed to simply defend himself with a firearm.'

Pretoria - A credit card belonging to Blue Bulls prop Bees Roux, who has been charged with the murder of a Tshwane metro policeman, was used at a fast food restaurant shortly after the incident.

This is what Roux's legal representative, Rudi Krause, alleged in the Pretoria Magistrate's Court on Monday, where Roux applied for bail after the death on Friday of Sergeant Ntshimane Johannes Mohale, 38.

Krause said Roux's credit card was used at a McDonald's restaurant on Friday morning at 02:31 - between 30 minutes and an hour after Mohale was assaulted.

About 50 metro police officials, including senior officials as well as Dikeledi Lehobye, mayoral committee member for community safety, were in the court.

Mohale's brother, Richard Taukobong, 48, called out to Roux "You fucking dog!" as he was led to the dock.

When Roux was led out for a short recess minutes later, Taukobong yelled: "I'm going to get your mother, you fucking dog!"

Metro police officials repeatedly had to hold Taukobong back. After the lunch hour, armed members of the police's tactical response unit entered the courtroom to maintain order.

Roux said in his statement to the court, which was read by Krause, that he is not a flight risk and that he has thus far done everything in his power to help the police with their investigation.

The defence said Roux will plead not guilty and asked that bail be set at R5 000. They indicated that Roux earns R850 000 per year.

This was paid and Roux was released on Monday.

Bees "Was being blackmailed"

Bees Roux may have become the victim of blackmail at the hands of metro police officers, after he spent a drunken evening at an infamous strip-club in Pretoria.

Roux had been at the club, Flamingo’s in Church Street, until the early hours of the morning before he was flagged down by members of the Tshwane metro police.

Roux later was arrested for murder after an incident in which one of the metro policemen died.

Pieter Crous, owner of Flamingo’s, said on Wednesday that officers of the Tshwane metro police would wait for his clients to emerge in the early hours and then drive them to ATM machines.

“The clients must then draw money and give it to the metro police officers or face being arrested for driving while drunk,” explained Crous. He confirmed that Roux and a friend were at his club on Friday morning.

Ancestors will be called on to haunt the alleged murderer of Johannes Mtshumane Mogale, executive director of policing Ndumiso Jaca said at the memorial service in Pretoria on Thursday.

"Let's call on the fallen members of the department to go and man the road blocks and ensure Bees doesn't rest."

Roux was arrested last Friday after he had allegedly been pulled over by Mogale for drunken driving.

Shortly after, Mogale's beaten body was found by two other patrol officers.

"Let's call on our ancestors, lets ensure we hound Bees until he tells the truth," he said to angry shouts of agreement.