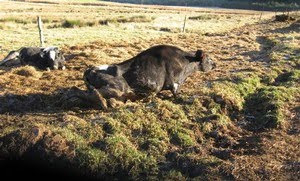 In the early hours of Sunday morning May 29, a group armed with pangas descended on a Kokstad farm intent on destruction.

The attack was notable for its savagery, leaving cows hamstrung, without tails and with deep cuts in their udders, legs, backs, ears and heads. Nine of the 37 cows that fell victim to the attack had to be put down

The attackers then set 150 bales on the farm alight.

Douglas Wolhuter, "When I arrived at the scene, it was like it only happened an hour or two after the attack. The first cattle I saw were the eight that were hamstrung. They were so badly mutilated that they had to be put down."

"In my opinion the cuts on the udders were consistent with attempts to hamstring the rest of the cattle, while slashing the face and the back was just malicious," Douglas said.