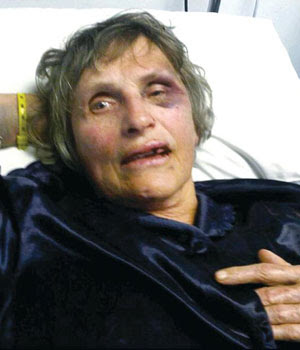 A badly beaten Mrs. Schoeman in Hospital
An elderly South African farmer, 86 year old Tolstoy Schoeman was beaten and strangled to death by intruders at his farm near Badplass in Mpumalanga, shortly after midnight on Thursday .

The killers who were armed with a panga and a knife then severely beat Mr. Schoeman's 65 year old wife Güdryn before driving her to an ATM about 5 km outside of town where they forced her to withdraw cash. The killers then rolled the car and fled.

The amount of blood at the scene showed that the victim put up quite a fight before he was overpowered, tied up and strangled with his track suit pants.

Tolstoy Schoeman had farmed in the area for 46 years and had helped in building up the local town. His traumatised widow remains in hospital.

Thanks to Mulder and Heather for this information
Posted by Sarah Maid of Albion at 10:24