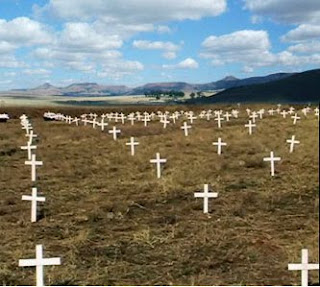 Only hours after updating the figure representing the number of South African Farmers who have fallen victim top the on-going anti-white genocide in that benighted country, I have had to do so again as news of further death torture and cruelty has been brought to me.
In the early hours of this morning on their farm in Limpopo, 15 men tied up a 40 year old man and beat him to death before gang raping the man's wife before turning on the couple's four-year-old daughter and seriously assaulting her.

The farmer's widow and child were taken to a nearby hospital, where they are described as traumatised.

The motive of the attack remains unclear, and nothing was taken.