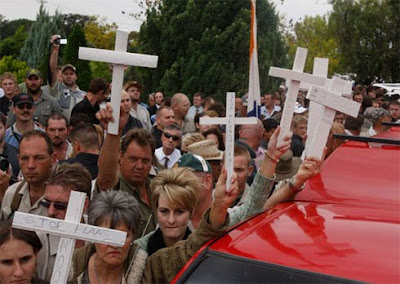 The genocide of white South Africans is heating up.

Last week, South Africa's ruling African National Congress (ANC) finally told its members to stop singing the song "Kill the Boer" -- that is, murder white South Africans. ("Boer" is Afrikaans for "farmer," but colloquially, it is a disparaging term for any white South African.) This came after ANC Youth League leader Julius Malema defied a court ruling and kept singing the song (he still refuses to stop), and after Eugene Terreblanche, leader of the noxious and hateful neo-Nazi Afrikaner Resistance Movement (AWB), was found savagely bludgeoned to death at his farm in South Africa's North West province.

The international media focused on Terreblanche's white supremacism, showing his followers giving the Nazi salute at his funeral. No account of his murder or funeral spoke about Malema, "Kill the Boer," or black supremacism -- yet that is the really important story in South Africa today.

Whites in South Africa are keenly aware of the plans to kill them. They expect mass killings to begin very soon after the death of Mandela, but to tell this to the world is a waste of energy. More than three thousand white farmers have already been murdered, and Genocide Watch lists the Boer farmers in South Africa as victims of genocide -- but the media couldn't care less. Malema has praised Zimbabwe's murderous seizure of white-owned farms as "courageous and militant." White South Africans know what's coming.

Malema keeps singing the apartheid-era song "Kill the Boer" even though South Africa's highest court ruled that the song was hate speech (a decision the ANC is appealing, although they've asked their followers to stop singing it in the meantime; they've emphasized that they have not banned the song).