Even the pets are not spared 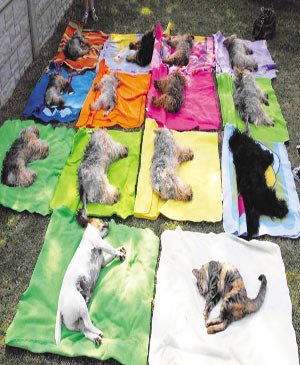 They say that one of the early signs of a potential sadistic serial killer is that they start by torturing and killing domestic pets. That is why a largely unreported phenomenon which has been going on in South Africa for some while.

If the British people can not find it in their hearts to care about the terrible deaths inflicted on white human beings, will they instead care for the vast numbers of white people's pets who are being sadistically killed? Or will they consider them, as they seem to consider the slaughtered and tortured white children responsible by birth for the sins of Apartheid?

The following are a random sample of news stories have appeared in the South African press over the last year:

Over 500 dogs poisoned this year.

Over 500 dogs have been poisoned since January in Gauteng town, Heidelberg …. This is only one vet’s figures alone, and of the 500 he was able to save only 40.

Angry residents, at a community meeting, threatened to deal those responsible themselves. They complain that police do nothing about criminals and to protect the community.

The local police chief did not attend the meeting

A family from Randfontein is shocked after their 3 dogs were poisoned over the weekend, and near Parys, an animal lover is receiving trauma counseling after 11 of her dogs died. (A Ford Bantam utility vehicle was found to be stolen around when they wanted to rush the 11 dogs to the vet)

Willem Post (41) of Randfontein said on Monday that no one in his family can sleep at night since their dogs were killed. His neighbour saw 3 boys giving bread to the dogs around 06:00. Post saw the dogs around 07:30 they were still alive. 20 minutes later, the smaller dogs were dead and the bigger dog was foaming at the mouth. He took the bigger dog to the vet, but she didn’t make it.

15 dogs were found dead by residents of Princess road in Claremont, Johannesburg. All were poisoned in the early hours of the morning, presumably by whoever broke into 2 vehicles to steal the sound systems, in that street.

52 year old Chrissie Vermaak, was first to discover the slaughter and described the poisoning as barbaric and cruel.

Dog killed with spade in what was called "barbaric cruelty" - details

I know some will say that these were only animals, but many were much loved pets, and it adds to an overall picture of cruelty and savagery which is very troubling

From Dina
Posted by Sarah Maid of Albion at 13:53