Two young men slain in their own homes

'My son died in my arms'
Cape Town Friday 16 April: A young Cape Town man, 23, bled to death in his father's arms on Friday after an early-morning attack by intruders.

Conrad Griss, of Hout Bay, died despite the frantic efforts by his father, Charles, to stem the flow of blood from his face, where he had been stabbed.

"I was sitting there with the blood pumping out," said the anguished computer businessman.

"I couldn't stop the bleeding, I tried to, but it was impossible."

Griss said he had been woken soon after 1.30am, when he heard dogs barking and his son's cries for help.

Killed in his own bed 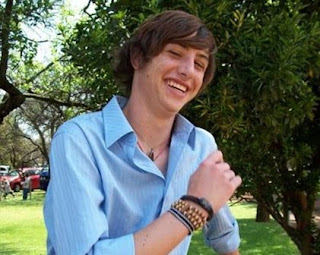 Ernest, who was due to take his home schooling exams in two weeks was shot dead moments after getting into bed shortly after he, together with his father and sister had chased away three men who had tried to break into his family's smallholding.

It is believed that the killers, who had been chased off, returned to the house and waited for Ernest to get into bed.

Watching him through a partly opened curtain, one of the men - who has yet to be caught - pushed a gun through a window and opened fire on him.

The bullet struck Ernest in the elbow, then tore through his chest and stomach, fatally wounding him.

Screaming to his mother, Renette, that he had been shot and urging her to be careful, Ernest ran to the family's gun safe. He died as he was trying to get out a revolver which he wanted to use to protect his mother and sister.
Full news Story