The legion of white victims 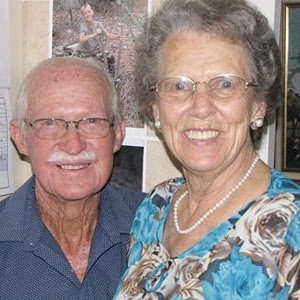 An 85-year-old grandfather from Soutpansdrift in the North-West fought with his bare hands with three armed intruders to protect his life partner, even after they shot and stabbed him.

Dawie Meintjes and his life partner, Maria de Beer, 81, were attacked at 01:00 on Monday morning in their farm outside Brits.

De Beer was struck by shrapnel from the bullet on three places on her right leg, Mr. Meintje was shot in the hand and also stabbed in the arm

Thankfully Dawier and Maria survived their ordeal, and for once it has not been necessary for me to update the tragic figure at the top right hand of this blog.

However, in another incident police are investigating the murder of 80 year old Helina Kotze after her body was found with her wrists and knees tied up at her home in Potchefstroom on Tuesday.

Ms. Kotze's throat had been slit and her wrists and knees were tied up with kitchen napkins and sellotape.

As Ms. Kotze was not a member of the farming community I can not legitimately include her murder amongst the farm killings, she is another of the many urban whites who are raped and murdered in South Africa each year, but of whom no accurate count is available.

______________
Comment: People often write to me and ask why whites stay in South Africa given the increasing violence being perpetrated against them. However, as with the cases above, a significant number of the victims are elderly people in their 70's and 80's, frail vulnerable people in their twilight years who have known no other home and have no remaining contacts outside South Africa. Most are no longer in a position to start a new life in a foreign land.

Also, at least 10% of the white South African population, some 450,000 people, now live in dire poverty as a direct result of black favouring affirmative action which has deprived them of their jobs and their homes. These whites struggle to feed their children on a daily basis, not only is the price of the air fair out of the country beyond their means, but no Western country would take them in.

Thanks to TVJ for sending me to a link to this item in Business Report regarding the growing number of white squatter camps in South Africa.

Meanwhile that remarkable lady Adriana Stuijt who runs the Censor Bugbear blog continues to report on the plight of whites in South Africa, including those now living in poverty. Here are links two of her recent postings on this subject:

I highly recommend Adriana Stuijt's two blogs Censor Bugbear Reports and Afrikana Genocide Archives for the prolific and well researched reporting of news which the Western media actively seeks to hide.
Posted by Sarah Maid of Albion at 03:23