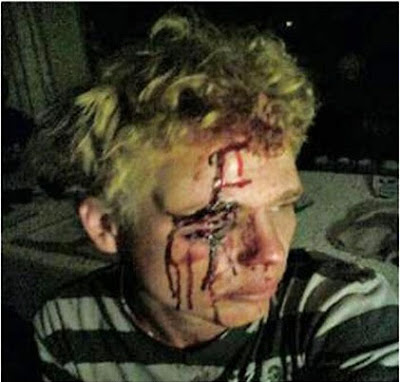 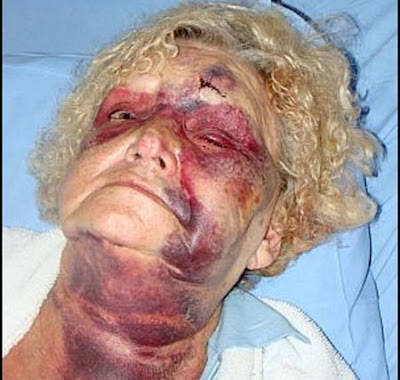 25 March 2010: "I am just grateful he didn’t rape me,’ said 79-year-old Afrikaner resident of Bloemfontein Mrs Hester Thomas after her attacker stabbed her above the eye, beat her purple and blue, choked her, jumped on her chest and kicked her during a so-called ‘house robbery’ in which very little of any value was actually ‘robbed’. Volksblad journalist Vicüs Bürger reports that this is the third attack on elderly Afrikaners in Bloemfontein within a week. She was admitted to Pelonomi Hospital. The attacker merely ‘robbed’ some meat, cheese and clothing…
News report
_____________ 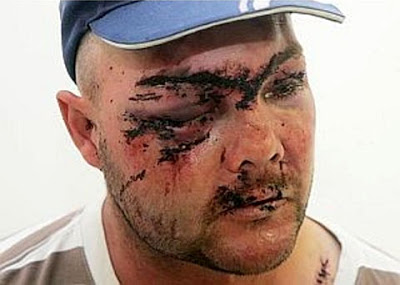 23 March 2010: “It was like something from a horror movier,” says Mr. Johan van Vuuren after five of his family members were violently attacked in their parents house in Jagersfontein.

His parents, Boet (80) and Francina (77), brothers Marius (44 - pictured above) and Marthinus (35) and nephew Juan (13) was attacked on Sunday evening in their house in Harrington street, Jagersfontein, by six men armed with spades and knives.

The attackers showed no mercy and left a bloody house behind..

Even Boet and Marius were cruelly assaulted, even though both are paralysed and in wheelchairs due to a marrow virus and a car accident respectively.

25 March 2010: An elderly couple was seriously injured in a farm attack near Nelspruit, Mpumalanga police said on Thursday.

"The couple was found by their gardener when he came to work early in the morning and he went straight to the farm manager who phoned local security and police," said Inspector Dawie Pretorius.

The attack against the 82-year-old woman and 81-year-old man occurred on their farm, "Ooswes", in the Sterkspruit area in Nelspruit around 2am on Tuesday morning.

A group of men smashed through a glass door and attacked them before fleeing the scene with two cellphones and their truck.

The woman sustained serious head injuries and is in a critical condition in hospital.

Hat Tip: Dina and Censorbugbear
Posted by Sarah Maid of Albion at 14:18