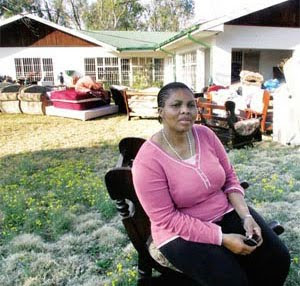 Kero Kgobe
A couple of emaciated cattle, sheep and pigs are all that remain of what was once a prize farm, Vergesocht, outside Bloemfontein. It was rented from the government by a female farmer.

Kero (Karoline) Kgobe, 46, who was named Female Farmer of 2008 by the Free State department of agriculture, was evicted from Vergesocht by the Department of Rural Development and Land Affairs.

On Monday, the Bloemfontein sheriff removed Kgobe's luxury leather couches, a large plasma screen television, designer clothing, computers and chairs from the once luxurious farmhouse. Her BMW X3 vehicle stood in the garage.

Her eviction came after an order was issued by the Free State High Court. Kgobe was supposed to have left the farm by July 23, but disregarded the order.

Six emaciated dogs were sniffing among Kgobe's possessions. When the kitchen contents were being carried out by the sheriff, the dogs grabbed a loaf of bread and wolfed it down, plastic bag included.

An irate Kgobe said she didn't understand why government had entrusted her with a farm and then took it away again.

"I didn't ask for the farm. Why did they give it to me and why are they taking it away again? This is a good example of how government is letting its people down."

She said the land affairs department didn't even offer her alternative lodging.

"What am I supposed to do now? I have nowhere to go."

Gani Ramagaga, chief executive of Free State rural development and land affairs, said there were many valid reasons why Kgobe was asked to vacate the farm.

She was accused of several transgressions, including opening a bar on the farm and selling alcohol. This led, among other things, to the murder of a woman by a farm labourer.