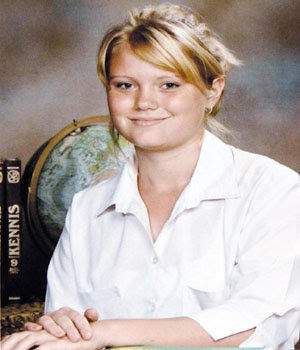 Anika Smit
A father arrived home from work on Wednesday to discover the body of his teenage daughter, naked and with her hands hacked off.

That morning, Johan Smit had said goodbye to his only child, 17-year-old Anika, before he left their home in the north of Pretoria for work.

When he got home she was dead and had presumably been raped. Her hands were cut off between the elbow and wrist and were missing.

"When I saw the dining room chairs were overturned, I knew something was wrong," said Smith, 54, from Theresapark, as he fought back his tears.

"I called her, but she didn't answer."

Moments later, Smit discovered his daughter's body in her bedroom.

Police spokesperson William Mahlaole said a post-mortem will confirm the cause of Anika's death and whether she was raped or indecently assaulted.

Anika, who lives with her father, was alone at the home on Wednesday. She had stayed home from school due to an ear infection.

Smit arrived home after work at about 16:00 and saw the outside gate and security gate standing open with their locks missing. Anika's scooter stood at the front door.

When he went into the house, he saw the dining room table had been moved and the chairs were overturned. When he called his daughter and she didn't answer, he went to her room.

"She was lying on the ground, naked. Both her hands were gone, they'd been cut off. They must have taken them."

NOTE: Typically the report does not say so, but the only reason I can think of for taking body parts from the victim, and that is for use in muti medicine.