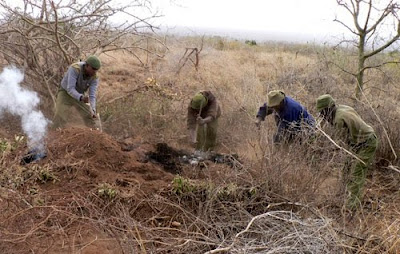 Land reform minister Gugile Nkwinti warned the land might be repossessed if the farms continued to fail.

Almost 60,000 sq km (23,000 sq miles) have been redistributed under policies aimed at benefiting black people who were allegedly left impoverished by apartheid.

Unlike in Zimbabwe to the north the land was bought from white farmers who sold up voluntarily.

The SA government had set a target of 2014 to redistribute one-third of white-owned land to the black majority.

But Nkwinti acknowledged that the deadline would not be kept.

He said the focus would now shift to helping the black farmers make their land productive.

"The farms - which were active accruing revenue for the state - were handed over to people, and now more than 90% of those are not functional," he said.

"They are not productive, and therefore the state loses the revenue. We cannot afford to go on like that... No country can afford that."

At the end of apartheid in 1994 almost 90% of land was owned by the white community, which made up less than 10% of the population.

Land reform is a sensitive issue in South Africa and has been brought into sharp focus by the decline of agriculture in neighbouring Zimbabwe, where many white commercial farmers have been violently evicted.

Use land or lose it - Nkwinti

The "use it or lose it" principle will be applied firmly to redistribute farmland to ensure South Africa's agricultural output does not decline further, minister of land reform and rural development, said Land Reform Minister Gugile Nkwinti on Tuesday .

"You know, use it or lose it will work now, with the recapitalisation and development with the strategic partnerships we will form with farmers whether active or retired," he told a media briefing in Cape Town.

"Our view is that [we should] give them a chance, establish a clear system of managing these farms, provide necessary support and those who do not want to work the land, take them out.

"There is not going to be any compromise on that part. The only thing that we thought we should strengthen is the support."

Nkwinti pointed out that the principle would not apply to people who were given land as part of the reconstitution process.

"But those who got land through redistribution, if they don't use that land, we will take it."

The minister revealed last year that more than half the farms bought by government as part of its Land Redistribution for Agricultural Development programme had failed or fallen into decline.