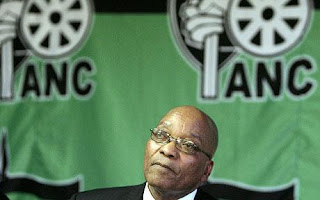 - Given some previously well known utterances that the ANC would rule (as opposed to govern), until ‘Jesus comes again’, as well as the very recent assertion by Zuma that any member of the ANC who dares to leave the party will be exposed by "the ancestors" and "will get sick" and that the ANC will exist forever, I can’t help but consider the vast differences in approach and understanding of democracy across cultural divisions.

Western centric thinking considers that a democratically elected government are servants to the public (who pay their salaries after all), and are duty bound to serve as long as the electorate see fit. They are answerable and accountable to the public that elected them. Should they fail to meet the mandate given them, they are replaced (by way of democratic process). In running a country (like running a business), there is no such thing as a “job for life”.

In contrast, in many cases (Zimbabwe for example), evidence would suggest that African centric thinking is somewhat different and adopts a “father (or mother) of the nation” philosophy and considers that rulers are to be automatically respected, revered, feared , seldom questioned, and provide some kind of perpetual moral guidance to the nation as a whole. An emotional kinship between the ruler and those that are ruled seems to prevail and hold more sway than actual bottom line performance and measurement.