Malema Defends himself to BBC 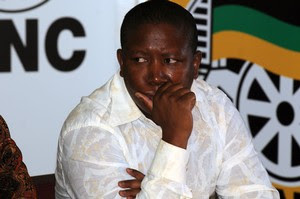 ANC Youth League president Julius Malema has defended his recent behaviour which landed him before an ANC disciplinary committee, while also pledging his allegiance to President Jacob Zuma during an interview with the BBC.

According to the BBC report, Malema - who is yet to attend anger management classes ordered by the ANC as part of his punishment for criticising Zuma - said he did not feel betrayed by the ANC president who had said the youth leader was "out of control".

Zuma "whipped the youth into line" whenever he saw "anything wrong", Malema told the BBC.

However, Malema also refused to admit he had done anything wrong.

Malema said he was "fighting for the emancipation of blacks and Africans in particular, politically, socially and economically", and that he would like to see democratic and compensated land redistribution in South Africa.

He was initially charged by the ANC for his public support for Zimbabwean President Robert Mugabe, throwing a BBC journalist out of a media conference and singing "Shoot the Boer" after it had been banned. The charges were later dropped by the party in return for Malema admitting guilt over criticising Zuma
Report