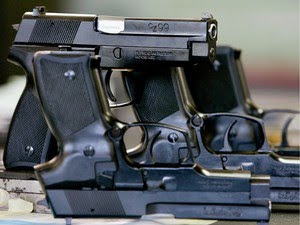 More than 5 300 firearms have been lost or stolen from police stations around south Africa over the past two years.

According to a written reply to a parliamentary question a total of 2 603 firearms were lost or stolen in the financial year 2009/10 and 2 759 the previous year.

Of these 457 of the firearms which disappeared over the two-year period went missing from police head office in Pretoria Meanwhile KwaZulu-Natal saw an increase of 238% from 353 in 2008/09 to 840 in the last year. Mpumalanga saw a 300% increase.

Action had been taken against 56 police officers.