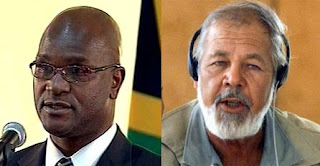 Farm and rural killings should not be politicised and all murders should be treated equally, Minister of Police Nathi Mthethwa said on Monday.
Addressing an AgriSA conference in Pretoria on rural safety, Mthethwa said the race card should not be brought into the debate by unions, political parties and other stakeholders to advance their own agenda.

"We do not see it as anything else political or racist, we see it as just crime.

"We cannot sit on different sides of the fence and point fingers, we need to recognise that most farmworkers and farmers are valuable assets."

"The cruelty and barbaric actions which is evident during such murders, was repeated in the case of Mr Terre'Blanche, and does not relate to the alleged motive," said TAU-SA president Ben Marais.

The situation in South Africa was much worse than the general perception and called for drastic intervention, he said.

"If we look at the course of events during the previous weeks, an upsetting pattern has materialised in which the murder of Mr Eugene Terre'Blanche is but one incident.