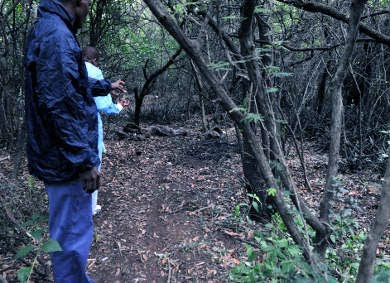 A forensics team at the crime scene where Masego Kgomo's body was found.
The killers of 11-year-old Masego Kgomo, whose badly decomposed and apparently mutilated body was found hidden in a dense clump of bushes near her Soshanguve home, are believed to behind the murder of three other young Pretoria girls.

Masego's body, which was identified by her parents and grandfather, was discovered on Friday night after one of the suspects took police from a provincial task team, assigned to investigate the case, to where she had been dumped.

The body, which was covered in a thick grey blanket, was found with her legs spread open in the centre of the clump of bushes in a field near the Soshanguve train station and the Soshanguve Hotel.

According to sources, police are investigating whether the little girl, who disappeared from her home on New Year's Eve, was raped before her genitals were removed. Officers also want to determine at exactly which point she was killed.

While police are remaining tight-lipped and refusing to comment on any of the latest information, including whether more arrests had been made, sources say at least one of the suspects has told police about similar murders of three other girls in areas around Soshanguve last month.

Continue reading here
Posted by Sarah Maid of Albion at 13:53