Official 'Does Nothing' for 7 years 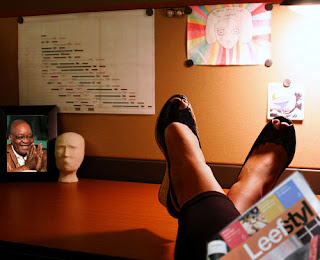 A Free State department of education official who has been "doing nothing" for seven years, has written a letter to President Jacob Zuma to stop her forced loafing.

Maryna Jacobs, 37, a senior bookkeeper with 18 years of service, wrote to Zuma that she had been relieved of her duties. Every day she sat and read the newspaper as no manager spoke to her.

"It is fun to do nothing for a while. But this has been going on for seven years. It is unacceptable," she wrote to the president.

On one of the few occasions that she was given a task, she was ordered to move the furniture of a deputy director. She refused.

Jacobs said she was also asked on Wednesday to draw up the budget. This she had done two years ago.

Sometimes she played hand soccer in the office that did the purchasing of schoolbooks.

Sometimes she drove for an hour in her bakkie through the streets to get rid of her frustration.

She mentioned in the letter that she had a charge of assault against her but said this was due to frustration.
Continue reading here