Another Day in Africa 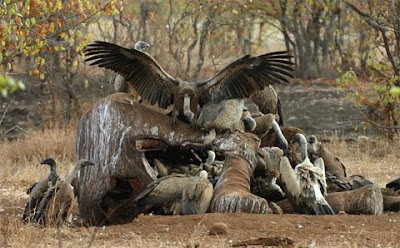 "I have promised to keep his identity confidential,' said Jack Maxim, a spokeswoman for the Sandton Sun Hotel, Johannesburg , "but I can confirm that he is no longer in our employment". "We asked him to clean the lifts and he spent four days on the job. When I asked him why, he replied: 'Well, there are forty of them, two on each floor, and sometimes some of them aren't there'. Eventually, we realised that he thought each floor had a different lift, and he'd cleaned the same two, twelve times. "We had to let him go. It seemed best all round. I understand he is now working for GE Lighting."

"The situation is absolutely under control," Transport Minister Ephraem Magagula told the Swaziland Parliament in Mbabane . "Our nation's merchant navy is perfectly safe. We just don't know where it is, that's all." Replying to an MP's question, Minister Magagula admitted that the landlocked country had completely lost track of its only ship, the Swazimar: "We believe it is in a sea somewhere. At one time, we sent a team of men to look for it, but there was a problem with drink and they failed to find it, and so, technically, yes, we've lost it a bit. But I categorically reject all suggestions of incompetence on the part of this government. The Swazimar is a big ship painted in the sort of nice bright colours you can see at night. Mark my words, it will turn up. The right honourable gentleman opposite is a very naughty man, and he will laugh on the other side of his face when my ship comes in."

"What is all the fuss about?" Weseka Sambu asked a hastily convened news conference at Jomo Kenyatta International Airport . "A technical hitch like this could have happened anywhere in the world. You people are not patriots. You just want to cause trouble." Sambu, a spokesman for Kenya Airways, was speaking after the cancellation of a through flight from Kisumu, via Jomo Kenyatta, to Berlin : "The forty-two passengers had boarded the plane ready for take-off, when the pilot noticed one of the tyres was flat. Kenya Airways did not possess a spare tyre, and unfortunately the airport nitrogen canister was empty. A passenger suggested taking the tyre to a petrol station for inflation, but unluckily the jack had gone missing so we couldn't get the wheel off. Our engineers tried heroically to reinflate the tyre with a bicycle pump, but had no luck. "When I announced that the flight had to be abandoned, one of the passengers, Mr Mutu, suddenly struck me about the face with a life-jacket whistle and said we were a national disgrace. I told him he was being ridiculous, and that there was to be another flight in a fortnight. And, in the meantime, he would be able to enjoy the scenery around Kisumu, albeit at his own expense."

4. From a Zimbabwean newspaper:

While transporting mental patients from Harare to Bulawayo , the bus driver stopped at a roadside shebeen (beerhall) for a few beers. When he got Back to his vehicle, he found it empty, with the 20 patients nowhere to be seen. Realizing the trouble he was in if the truth were uncovered, he halted his bus at the next bus stop and offered lifts to those in the queue. Letting 20 people aboard, he then shut the doors and drove straight to the Bulawayo mental hospital, where he hastily handed over his 'charges', warning the nurses that they were particularly excitable. Staff removed the furious passengers; it was three days later that suspicions were roused by the consistency of stories from the 20. As for the real patients: nothing more has been heard of them and they have apparently blended comfortably back into Zimbabwean society.
Posted by Sarah Maid of Albion at 06:54