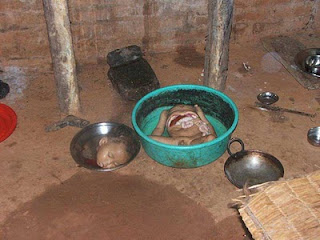 Nearly 1 000 families nationwide reported that the corpses of their dead relatives had been harvested for muti before burial last year.
The cases of missing body parts were reported to the Traditional Healers Organisation (THO), but there is no clear record as to whether police charged or arrested anyone.

"About 901 bodies had some parts missing, especially breasts and genitals," said national co-ordinator of the THO, Phephisile Maseko, on Monday. "The biggest question is, who are these people who purchase the parts? And, if we expose them, what systems are there to protect us?"

She expressed concern that in "most cases" police were involved in protecting those, often wealthy businessmen, who buy human body parts in the belief that it will boost their businesses.

Maseko said the elderly and children were particularly vulnerable to muti killings.

"People believe that if you use the genitals or hands of an old person or a child for muti, your business will make lots of money, but it's not true," she said.

She said traditional healers who used body parts to make muti were not true healers, but "heartless witches".

"How could a healer use body parts or remove somebody's body parts while the person is still alive? That means you are a witch, not a healer," she said.
Full report